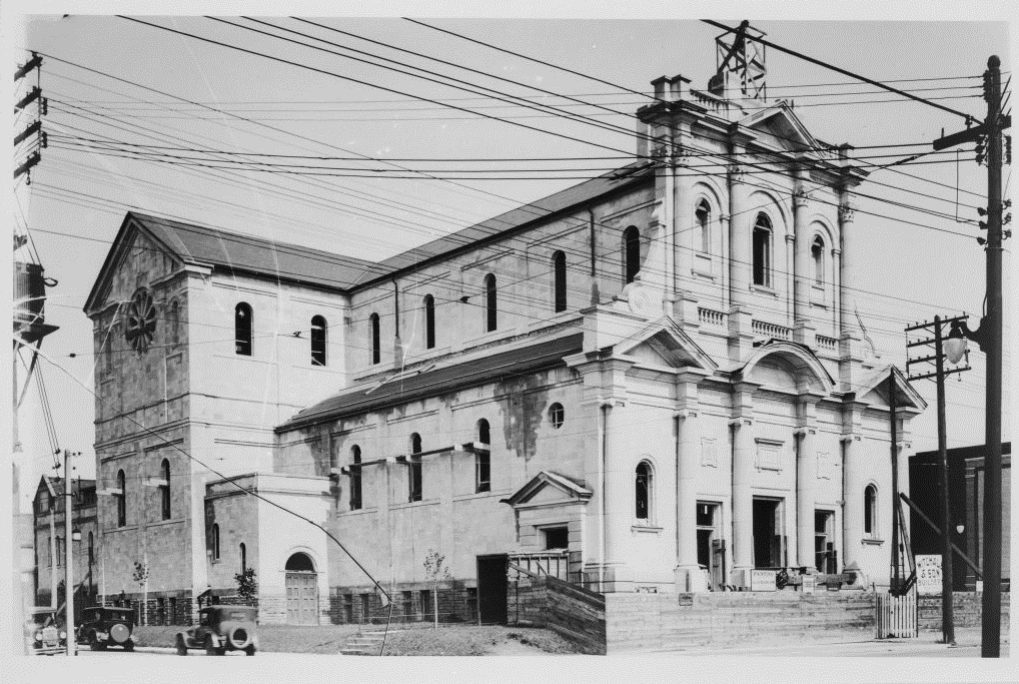 Holy Name Parish was established on September 11, 1913, a time when the city of Toronto was rapidly expanding eastward beyond the Don River. An eight-room Catholic school had already been built just south of the Danforth in 1912. The next logical step, taken with the support of Archbishop Neil McNeil, was to build a church. A provisional chapel was erected and the first mass was celebrated there on October
5, 1913, with 275 people in attendance.

It would fall to Holy Name’s founder and first resident pastor, Father Michael Cline, to undertake the hard work of parish organization and construction. Both Father Cline and the archdiocese had great plans for Holy Name, and by August of 1914, construction of a proper church had begun. But world events conspired to interrupt the building. In the same month that work began on the church, World War I was declared,
and construction of Holy Name was put on hold as workmen all over the city enlisted in the army. Nevertheless, three months after the beginning of the war on November 14, the great cornerstone,
(which can still be seen to the left of the front doors of the church) was laid during a ceremony attended by 3000 people and performed by 35 priests. The new church was named by Farther Cline as a monument
to the holy name of Jesus.

For the next six years, Holy Name parish grew rapidly. Masses were celebrated in the only part of the church that was complete- the basement- but it soon became clear that a bigger church and a parish hall
were needed. In November, 1921, a hall was completed, with full kitchen facilities and modern heating, able to accommodate 600 people.

The construction of the main church was completed in 1926 and the doors solemnly opened and were blessed on March 14 of that year. The new church was designed in the style of Santa Maria Maggiore (St. Mary Major) in Rome and was built of stone imported from Indiana. Over the main doors the statement that motivated its founders was engraved: “In nomine Jesu omne genu flectatur”- “At the name of Jesus, every
knee shall bend” (Philippians 2:10).

Holy Name continued to be a centre of Catholic community life on the Danforth throughout the Great Depression and World War II. Father Cline became Monsignor Cline and remained at Holy Name until his
death in 1947. His successor, Father Leo Smyth, remained pastor until 1979, and oversaw additions to Holy Name School in 1949, 1957, 1961 and 1968 to accommodate the rapidly expanding young Catholic
population along the Danforth.

Father Smyth and the congregation of Holy Name welcomed waves of new immigrants to Canada during those years. Masses in Italian were celebrated at Holy Name until, with Father Smyth‘s help, the Italians of the Danforth were able to establish their own parish, St. Catherine of Siena. This tradition of vibrant diversity continues today at Holy Name with the presence of the African Catholic community, as well as parishioners who hail from the Caribbean, the Philippines, India and Latin America, enriching the founding communities of Irish, Scottish and English Canadians who were the mainstay of parish life in the early years.

With the inauguration of Vatican II in 1963, Holy Name was caught up in the sweeping changes that were implemented to revitalize every aspect of the life of the Church. In 1967, a new altar was positioned so that the celebrant could face the congregation during Mass. The organ and choir were moved from the gallery on the second floor to the main floor to encourage congregational singing. The side altar became the
repository of the Blessed Sacrament, and the Communion railing was removed. Alterations
in the liturgy and the greater participation of the laity were long-term innovations that changed how the people of lived and worshipped in their Parish.

Today, as we celebrate the 100th anniversary, with the guidance of the priest from the Congregation
of Holy Cross, Holy Name continues to encourage it’s parishioners to build upon their faith. Ultimately, the ambition of Holy Name Parish in 2013 is to confront with faith, hope and humility the challenges facing the
Church in this generation, and to pass on a rich,Christ–centred, community- oriented heritage to the next generation. In 1927, Monsignor Cline wrote that Holy Name required “the close attention and fostering care
of ardent friends.” As we celebrate the 100th anniversary, that statement remains just as true as it was at the beginning of the life of our parish.